The Historical Role of a Bard

Nowadays, when people say they are a modern bard, they typically mean that they are musicians, writers, or entertainers. The modern bard is a storyteller above all else. I always thought this was a bit odd. Historical bards served a more important function than mere entertainers. They served to balance society, kept histories, curses and praised, participated in politics, and preserved the knowledge of their society. They were one part sorcerer and one part historian. They memorized legal information and embedded themselves in the political systems of the Gaulish aristocracy, where reputation and hierarchy served roles so important warriors willingly fought to the death or even committed suicide to honor their debts and oaths. The bard's home was at the feast, where hierarchy was challenged and upheld, and his position in society revolved heavily around the manipulation of the reputations of the people of his tribe.

The political importance of bards can be seen from some of the earliest writings on the Gauls. Pseudo-Scymnus discusses political councils in Periplus thus:  "With music they conduct their councils, using it to soothe the crowd."(1) Athenaeus has further information to add, when he writes:

"Posidonius of Apameia says in the twenty-third book of his Histories that the Celts have with them in war and peace companions whom they call parasites. These men recite the praises of their patrons before gatherings and to all those listening in turn. They are called bards--poets who sing praise."(1)

The nature of a bard can thus be summed up thusly: They were companions to the Gaulish military class, who patroned them, and would sing praises to their patrons and use their musical ability to calm what could likely become rather heated debate among the military aristocracy during political assembly. As to the nature of the poetry, Diodorus Siculus gives us another excerpt from Posidonius:

"The Gauls have a fearsome appearance and deep, rough voices. They are a people of few words and often speak in riddles, leaving many things for the listener to understand himself. They love exaggeration both to praise themselves and to belittle others. They are boastful, threatening, and love melodramatic behavior, but they also have sharp minds and are quick listeners. They have singing poets called bards who perform playing an instrument like a Greek lyre. These bards sing songs of praise and satire."(1)

Much could be made of this passage, but if Irish poetry is any indication, Gaulish poetics were full of allusions and metaphors, often ill-explained and perhaps filled with something similar to the kennings of Germanic poetry. Posidonius also adds the element of the lyre to the mix, something which I will certainly discuss later, as I have endeavored to reconstruct a Gaulish lyre and do research into poetical structures. Several Gaulish poem-types exist in the form of curse tablets, which give some interesting insights: alliteration and repetition was important, as were certain metrical structures.

Finally, Athenaus gives us another Posidonius quote which reveals the relationship between Gaulish bards and their wealth patrons:

"Posidonius tells the story of the wealthy Louernius(2) son of Bituis, who was removed from power by the Romans. He says that Louernius rode through the plain on a chariot handing out gold and silver to the thousands of Celts following him in an attempt to win popular support. He also set up a feasting area over a mile square with jars of expensive drink and plentiful food, so that for many days all who wished could enter and enjoy food continuously provided by servants. Louernius ended the feast on a certain day and was leaving just as one of the Celtic poets arrived. Running beside his chariot, the bard composed a song praising the generosity of Louernius and bewailing his own late arrival. Louernius was so delighted by the song that he threw the poet a bag of gold. The tardy poet picked up the bag from behind the chariot and composed another poem, singing that even the tracks of his chariot on the ground yielded benefits to humanity."(1)

Here the three qualities unite into a unified story: 1.) Gaulish feasts easily illuminate the political structures of the tribes. They were public affairs, probably meant to gain popular support for aspiring political leaders and to show off and reestablish current social hierarchies. 2.) Bards lived by the generosity of their patrons, the warrior aristocracy, and composed praises and satires to fit the whims of their investors. 3.) Poetry was a spontaneous affair with political purpose, serving both the livelihood of the bard and the reputation of their patron.

Finally, Irish sources give an interesting twist to the bard's repertoire. Poets in Irish lore are feared for their abilities, which border on the sorcerous. The bard was thought to be able to literally cause illness and deformity through satire, to literally curse and elevate through the power of poetry. This quality puts them outside of most social structures, and bards in Irish lore often get away with some pretty outrageous flaunting of the rules.

Finally, bards had a prophetic nature that is best found in the Irish filidh. For more information on that, I will happily direct you to the site of self-termed filidh Erynn Rowan Laurie, who has written many a good essay on the subject. Nora K. Chadwick also has an excellent essay on imbas forosnai, the prophetic inspiration of the Irish filidh.

The Gaulish word for a bard was bardos, from which we get the modern word. I tend to use bardos rather than bard to refer to my practices, to distinguish between modern music-oriented bards and the work that I do.

(1) Freeman, Philip. War, Women, and Druids: Eyewitness Reports and Early Accounts of the Ancient Celts.
(2) The spelling given in the book is Lovernius, but I have changed the V to a U in line with common transliteration of Gaulish words in Latin contexts.

"They have singing poets called bards who perform playing an instrument like a Greek lyre."

But what  was the Gaulish lyre? Was it similar to the Greek lyre, with its many forms? Given that the source for this quote was Posidonius, a Greek traveler and ethnographer, the comparison seems likely. However, we have a few primary sources for the Gaulish lyre. The first of these is the famous Lyre-Player of Paule.

The Lyre of Paule is a bit unusual when compared to a Greek lyre. The arms and the body seem to be from a common shape, with bulbous terminals at the end of the arms, a flat bar for the strings, and a mysterious second bar a short ways down the body of the lyre. The lyre has seven strings, indicating perhaps a scale in common with Greek instruments of a similar style. Lyres also appear on a few Celtic coins: 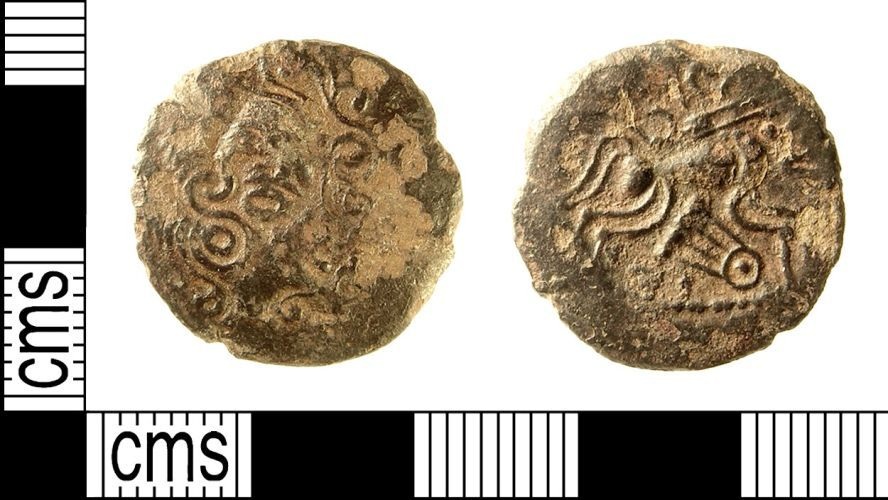 Source: http://finds.org.uk/database/artefacts/record/id/252024
The first image depicts a similar instrument to the Paule statue, while the second is a more abstract, possibly derivative image of it, with straight arms and a simpler design. Images of lyres can even be found in the earlier Hallstatt period, at the beginning of the Celtic Iron Age, depicted on this pottery image from Sopron, Hungary: 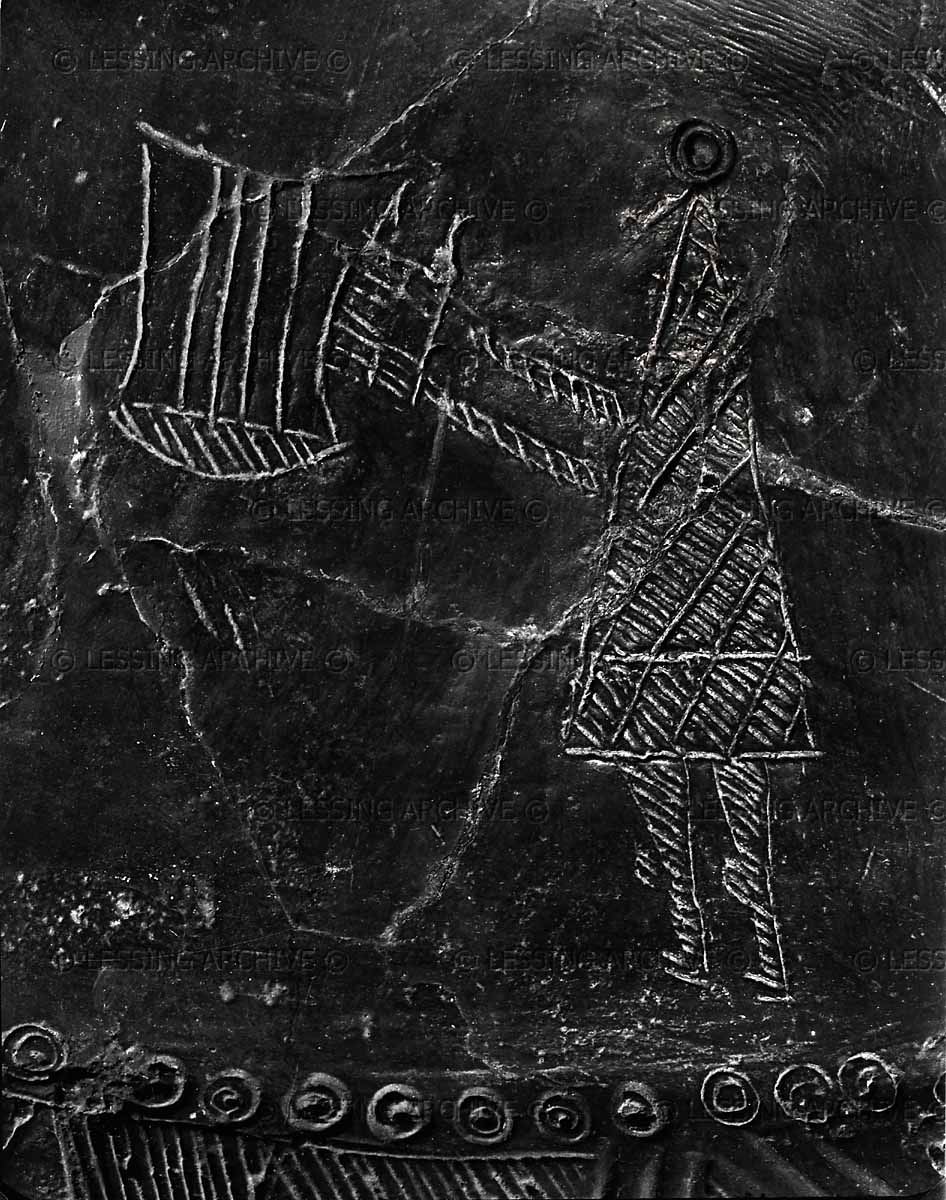 Source: http://www.lessing-photo.com/dispimg.asp?i=030303+9+&cr=9&cl=1
Evidently, the Gaulish lyre has a history beginning at the early Celtic Iron Age and continuing on into the Gallo-Roman period, from which the Paule Lyre dates. Finally, an indication of tuning: Assuming that the Gaulish lyre was akin to the Grecian one, the tuning would likely have been a diatonic scale in the key of D. By tuning my own lyre to this key, I have been able to replicate most of the ancient music that I listen to.